Today we thought to dwell on those monuments that you have probably seen thousands of times walking through the city, but that perhaps you don't know very well. We want to tell you some curiosities about 5 really unusual statues of Milan in the squares and streets. Some of these certainly shine for originality. So happy reading!

The Milanese spirit has always been extremely pragmatic and cutting. When popular irony targeted a courtly and emphatic work of art, it was, and is, capable of demoralizing even the greatest artist in the world. This happened to the brilliant Antonio Canova who in 1812 portrayed Napoleon Bonaparte in the guise of a peacemaker (today the statue is located in the entrance courtyard of the Palazzo di Brera). The result was a truly admirable work! Yet the Milanese when they saw it immediately renamed it "El balabiott" (from dialect, in Italian it means "the naked dancer")!

Even a genius like Leonardo da Vinci was affected by the Milanese irony: the monument dedicated to him in Piazza della Scala (1872, author Pietro Magni) who sees him at the center of the work surrounded by his four disciples it was immediately renamed "un liter in quater" (in Italian "one liter in four"); given its resemblance to a liter of wine with four glasses around it, where the Tuscan genius can remind the bottle and the four disciples of the glasses!

It then happens that the artist almost deliberately chooses to be the target of popular irony, creating truly unusual works. This is what happened in Piazza Missori to the monument dedicated to the homonymous official (1912, author Riccardo Ripamonti).

The horse of Giuseppe Missori in fact turns out to be somewhat ... tired. Next to noble steeds ridden by stalwart riders (for example the statue of Garibaldi in Cairoli), we can instead admire the quadruped of this work immediately apostrophe "horse de brum"; (hums used for towing some public carriages). In Milan there is also a saying to define tired people: "Te pàret el cavall del Missori!" (you look like the Missori horse!), just to give an idea of how this statue entered the everyday life of the Milanese.

This time the origin of the sneers is the name of a saint and the sculpture that represents him. We are in the courtyard of the arms of Castello Sforzesco and the religious portrait in the statue is San Giovanni Nepomuceno, protector of the Habsburg family. His name had the ability to twist the language, so much so that the eighteenth-century milanese promptly renamed it "San Giovan neither nè pu nè men" (San Giovanni neither more nor less).

For the last statue we have to move to via Mercanti, in front of the Palazzo della Ragione. Here stands, in all its mannerist splendor, the Palazzo dei Giureconsulti with a huge statue at the center of its facade representing Blessing Saint Ambrose . In the 17th century, the innkeeper still present in Piazza Mercanti was arrested because the price of polenta increased from two to three dollars. At the time of the arrest he justified himself by saying that it was not his fault, but of Saint Ambrose who had suggested it to him with the three fingers raised!

For these and other curiosities, read the latest post by Milanocuriosa. 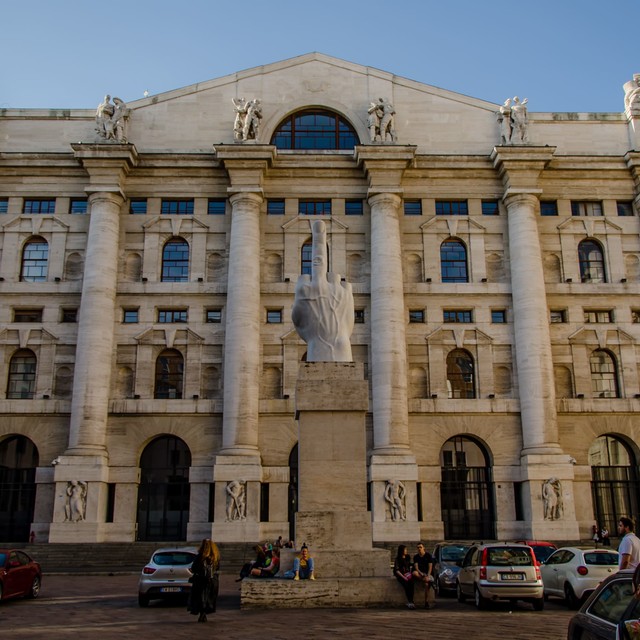